The NEW LIGHT SOCIETY (known as Chevra Or Chodash) was established in 1895 and incorporated under the Illinois General Not for Profit Act in 1896, to provide burial places ("Interment Rights") for the Jewish members of the NEW LIGHT SOCIETY and their immediate families, to conduct religious services essential and beneficial to the members and community and to conduct memorial services, burial services and contribute to philanthropic and cultural causes. (There had been a trust recorded in the recorder’s office of Cook County on March 2, 1922 document #4116048.)

The NEW LIGHT SOCIETY was dissolved in 1926 by the Illinois Secretary of State for the failure to file annual reports. Its activities were then taken over by the NEW LIGHT CEMETERY ASSOCIATION. On March 29, 1926 the SOCIETY deeded its cemetery to the NEW LIGHT CEMETERY ASSOCIATION. The deed was signed by the then president, Simon Frankel, Secretary Jacob Morgenthal and trustees Oscar Decker, Emil Kahn and Louis Levy. Subsequent Presidents of the Association included: H. Floersheim, Victor Feitler, Morris Wieseneck, Fred Turner and Al Gruen.

This Association was originally chartered as a cemetery association corporation to engage in activities reasonably related to the operations of a cemetery on a non-profit basis where burial services would be conducted. The placement of monuments at NEW LIGHT cemetery requires them to be facing east. There are two unmarked grave sites where Ezra-Habonim Congregation has buried religious artifacts and books. On April 13, 1997, the Association elected to be covered by the Illinois General Not for Profit Act and became tax exempt under Section 501(c)(13) of the Internal Revenue Code at which point contributions to the Association became tax deductible., The land title for the cemetery grounds is held by the Chicago Title & Trust, under #115499.

At the time in 1895 when the NEW LIGHT cemetery was established, the area was known as NILES, but later became LINCOLNWOOD. There was no housing in the area nor any paved roads. The total cemetery area at that time was 1.77 acres.

When Pratt Avenue was broadened it infringed upon a sliver of cemetery land. A number of burials had to be relocated within the confines of the rest of the cemetery.

Candidates for membership to the Association must be of good moral character, of the Jewish faith and at least 18 years old. An initiation fee is levied on the applicant upon acceptance of his/her/their membership application. Visitation to the cemetery grounds are encouraged during daylight hours with the exception of late Fridays, all day Saturdays and Jewish Holydays.

On September 24, 2000 a memorial was dedicated to honor those who had perished in the Holocaust. The memorial is centrally located within the cemetery grounds and is immediately visible upon entering the cemetery. This memorial was uniquely designed with the concept of affixing the bronze memorial plaques to the ground itself, replicating a burial. In the year 2001, with the assistance of Rabbi Shlomo Shuster the New Light cemetery acquired its added Hebrew name by a transliteration of its English name to:

On Sunday June 4, 2006, the New Light Cemetery dedicated a new building which replaced a dilapidated structure built in 1914 under the leadership of H. Floersheim, S. Frankel and H. Frank. Dedication services were conducted by Rabbi Herman Schaalman, The assembly of some 250 people was addressed by Hon. Gerard Turry, Mayor of Lincolnwood, Dr. Steve Nasitir, President of JUF and Al Gruen as President of The New Light Cemetery Association. Dr. Raphael Juss, Vice President affixed the Mezuzah to the building’s door post. The plans for the new building had been submitted and were approved by the Lincolnwood Village council. The exterior of the building was designed by the then President Tom Donaudy of the College of Architecture, Florida Atlantic University, Boca Raton. Included in the new building is a chapel which is available for funeral services, meditation and other needs of the Association membership. Its capacity is 70 seats and it is expandable for an additional 40 seats. The use of the chapel eliminates the need to travel from a funeral home to the cemetery for burial. The MANDER CHAPEL is so named in memory of Walter Mander whose estate, under the direction of Mr. Charles Wolf, made the major contribution toward the new structure. The building also has an apartment for the cemetery caretaker, office space as well as restroom facilities.

The interior, western wall of the chapel features seven elongated windows to simulate the seven branches of a menorah. The southern wall or the front of the chapel is adorned with the doors of the former Ezra-Habonim Congregation’s Aron Kodesh. 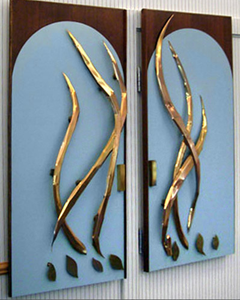 The attached sculpture, created by Mr. Al Gruen, depicts the historical “burning bush”. The building’s exterior features a basin for those who choose to wash their hands in accordance with religious tradition. Also affixed to the exterior eastern wall of the building are plaques acknowledging each individual donor and a past and future mission statement of the Association which reads as follows:

"New Light was established by European Jewish immigrants in 1895 and continues to serve not only those who found sanctuary, but also those who were born in these great United States of America. Regardless of origin, we in the diaspora carry in our hearts, minds and souls, love for our people’s unique place on earth, Eretz Israel. Our care and concern for our brethren living in the Land of Israel will always influence our lives."

The cemetery Association holds an annual memorial service in front of the Holocaust Monument taking place between Rosh Hashannah and Yom Kippur. The services are conducted by clergy selected from the larger Chicago Jewish community. During recent years the New Light cemetery had the distinct honor to count among these clergy, Rabbis: Neal Brief, Herman Schaalman, Joel Lehrfield, Philip Bentley, Shlomo Levine, Jeffrey Weill, Chazzans Shlomo Schuster and Alberto Mizrahi, and Benjamin Warschawski. About 200 people are usually in attendance.

The cemetery ground is equipped with features such as security cameras, PA system, electric outlets and motion detectors. A computer so equipped can view cemetery activities from anywhere in the world at any time. The cemetery has two entrances—one on East-Prairie Road and the other on Pratt Avenue—making it easy for limos to enter one and exit the other. There are benches along the road which leads from west to east through the middle of the cemetery. The benches provide visitors an opportunity to rest while visiting the cemetery.

In 2001, Mr. Norman Schwartz Z"l, former President of the Jewish Historical Society, spent countless hours surveying the cemetery and gathering information from monuments for the purpose of record keeping and researching historical aspects of the cemetery. That plotting was subsequently digitized and is now a permanent record for the operation of the cemetery.

The NEW LIGHT Cemetery can accommodate approximately 3,000 graves sites of which 1,700 are now occupied or have been purchased for future use. A potpourri of foliage enhances the cemetery — including artificial vines on the fences, 20 rare Catalpa trees within the cemetery as well as flowers and shrubbery. The New Light cemetery will perpetuate itself, in dignity, far into the future by its continuation of the well thought out preparations and its financial security. Future generations will have the opportunity to visit the grave sites of their beloved ancestors in a garden like serene atmosphere. Unlike several other Jewish cemeteries in the Chicago area who are already bankrupt, dilapidated or deserted, the New Light cemetery's future is being cared for tenderly and with pride.